The physical and emotional differences in the development of five-year-old, to eight-year-old or 12-year-old kids can be enormous therefore coaching them in the same way can create huge problems. This is one of the main reasons why we now have three separate compulsory courses for our Small Blacks grades.

Keep everybody engaged at practice. Don’t leave anyone out. It is very easy to spend a lot of time with the ‘good’ and ‘bad’ kids. The big groups, that don’t provide you with any stress, are just as important.

When coaching young rugby players there is so much to consider that coaches often forget the prime role that they have, which is to coach the players in the relevant skills of the game of rugby.

Therefore, we must progress through in stages to match the players’ personal and physical development.

Skill development in these grades should be well-structured, positive, and enjoyable!

But “coaching” isn’t always the issue when you turn up to a game or practice as a coach. Sometimes the behaviour of the players will be your biggest challenge and all the good skill development and will in the world won’t help if the team is misbehaving or you aren’t organised. This is all part of coaching Small Blacks!

It’s not all about coaching.

The Voice and The Look

The Art of Refocusing Interest

Use a quick, firm word, action, whistle or clap to get activities back on track. If this doesn’t work, don’t yell or recklessly run around to get the attention of the players – just STOP the group – DEMAND that they all stop talking and look at you – WAIT until everyone does so before trying to start with your comments.

If someone starts clowning around or chatting in the background after you start talking – STOP! Confidently re-demand silence before continuing. Keep doing this until they learn. Eventually, the other players will know your boundaries and they may even start to tell a player to be quiet themselves. When the disruptive player starts to get negative attention from their peers, the behaviour tends to cease swiftly.

All young children misbehave at times. If the player is not normally disruptive or if the disturbance is not a big deal - and is quickly abandoned with a quiet word from you – don’t make a big deal over it.

If you are too strict and launch with all ‘guns blazing’ to deal with a small offence, this causes two problems. First, the non-disruptive players will start to fear you and they will become afraid to make mistakes for fear of disappointing you.

Secondly, the more defiant players will figure out that you explode in response to an offence - so they won’t see any reason to change their behaviour until you do.

As a result, it is not unusual to find utter chaos when the coach is not using good judgement to deal with unsatisfactory behaviour.

When misbehaviour disrupts the activities of the other players, the coach needs to use “the Voice” and “the Look” to stop the behaviour instantly. 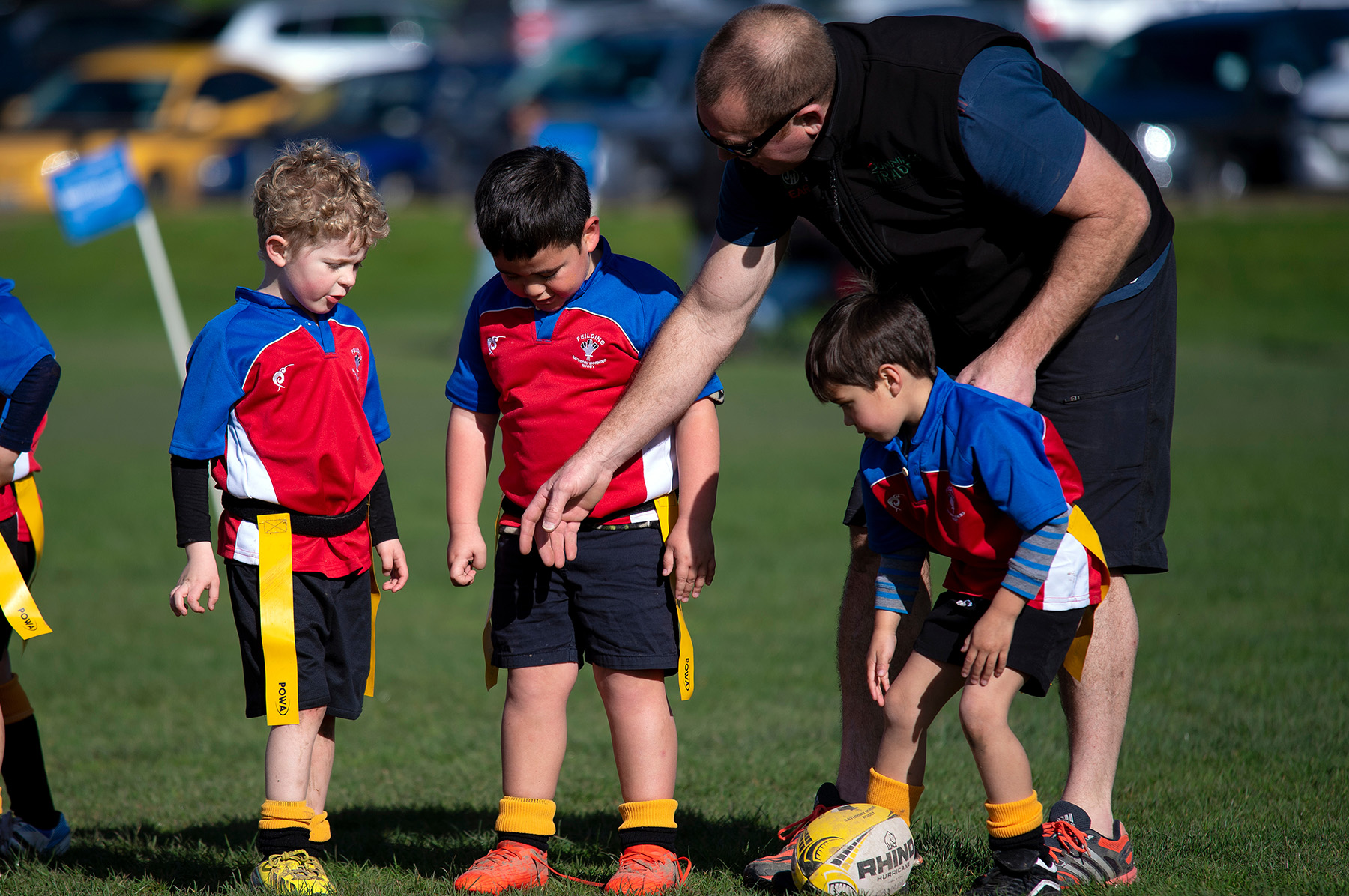 Talk to the players in terms of Rules. They tend to remember Rules better as they have them at school and home. So, tell them that “Pushing a team-mate is against our Rules”. Then, quietly get the offender to tell you WHY this is against the rules. Getting the offender to put into words why other players might not like to be pushed shows the other players that this kid knew better. Once the player admits that they knew better, make them apologise. The apology is likely to be reluctant but requiring them to apologise helps to breed good sportsmanship. If they initially refuse to apologise make them sit out the activity until they do.

Sometimes, a player may not understand why something is against the Rules. In these cases, it is important to explain why you are displeased, and explain what you want in the future.

If one team-mate started it, and the other finished it – make them both apologise, then make the player that finished it explain to you how they plan to handle things next time i.e. come to you. The instigator should have to do the same AND say two good things about his foe (usually effective in healing the wounds all around).

Be very cautious in using physical activity as punishment. Learning to connect running or exercise with punishment can cause players to dislike that activity.

This isn’t too helpful when you need them to do this activity as part of their rugby training. Even so, there are times when a quick set of star-jumps or press-ups may help to refocus the player. These should not be tedious (no more than 5-10). Be careful with this. If the player is looking for attention and wants to muck around, they will use the punishment as an opening to have fun at the expense of the coach. If the coach already knows that they are dealing with a disobedient player, tell the player to go sit out until they can behave.

A time-out is very effective. Most players want to be with everyone else – even if they are a troublemaker.

The coach can give the player the choice of returning when the player decides to behave or if the player is refusing to take part in an activity which they don’t like, then sit the player out for the remainder of the practice. This may seem harsh but otherwise the coach will send the message to the team that, if you don’t want to do an activity, just go sit down - and you won’t experience any punishment.

Once the players witness that they don’t get to pick and choose activities, they will work out that they can’t avoid doing hard work.

The perfect spot for a player to sit out is where you (or another adult) can keep them in sight, but far enough removed they cannot easily distract the rest of the group. Don’t let a playmate join them for company; if two players must be sent out, send them to opposite ends of the field.

Good behaviour should be praised and rewarded to reinforce behaviours you want at practices and games. Praise goes a long way in turning a good team into a great team.

Another angle to improve a whole team that’s indifferent and unfocused is to make the most of the players’ favourite part of the practice: THE GAME. Try this: “The sooner we learn to do this, the longer we can play a game”.

Sometimes, your team’s energy and frame of mind simply isn’t going to complement your well-intended, planned practice session. If normally cooperative players are exceptionally wild and your fine tunings don’t work, discard the plan and play nothing but modified games. As long as the players are getting lots of touches on the ball and you are able to relax, consider it as an opportunity to recharge the batteries, and just have fun. You will live to fight the battle another day.