The general principles of caring for an injured player are:
1. Do no further harm
2. Take control
3. Avoid unnecessary movement
4. Speak to the player
5. Call for help if needed
6. Ensure more experienced help is on the way
7. Recognise when you need to do more, which may include calling an ambulance

Soft tissue injuries are the most common injuries in rugby for players.
They are a major source of pain and disability. They're mainly sprains, strains, tears and bruises that affect ligaments, tendons and muscles.

Once an injury has occurred, it is very important that the injured area and the player are protected from further injury. Failure to do so can aggravate the problem and delay healing.
• Abrasions and lacerations need to be covered
• The injured joint should be supported by taping or bracing
• Weight-bearing should be avoided

Players can recover quicker from these injuries if they follow the five-step treatment process -  Remember: R.I.C.E.D. 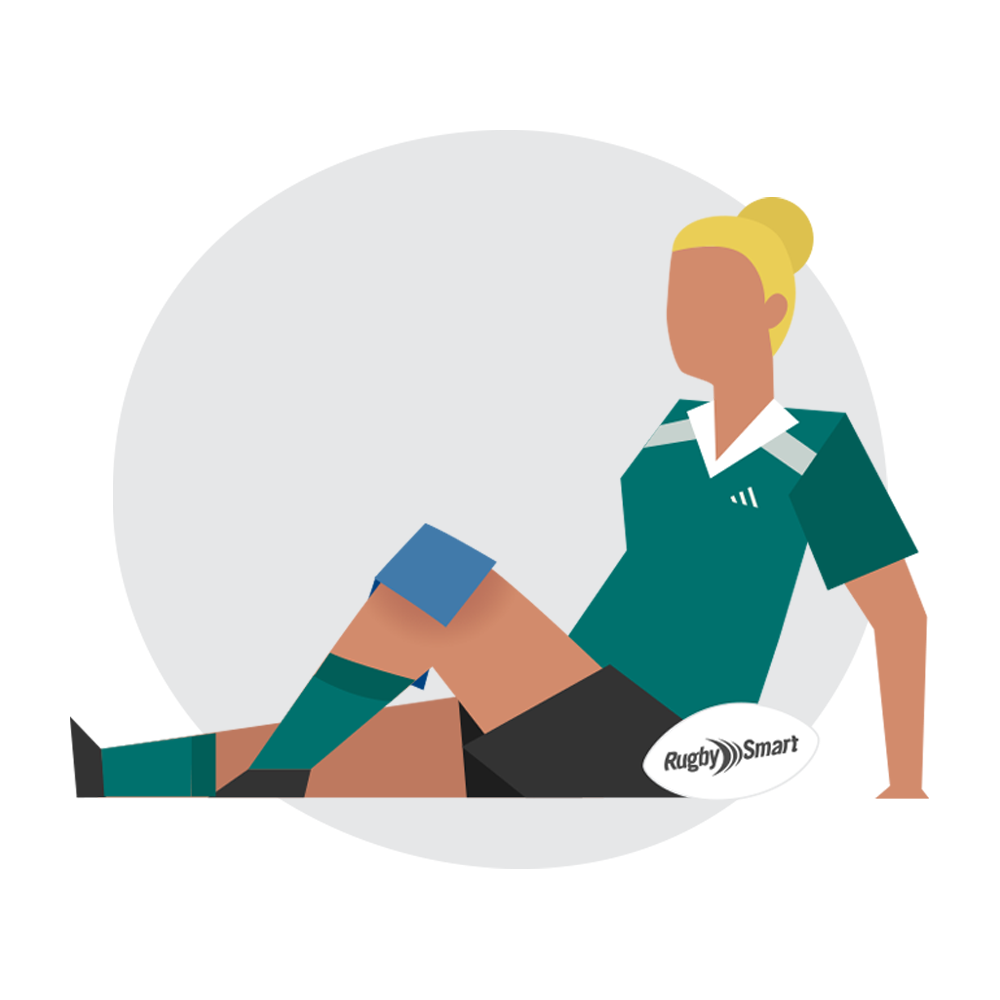 The first 48 hours after an injury are critical, so make sure you don't cause any more HARM than you already have.

So, avoid Heat, Alcohol, Running and Massage. These will all make things worse.

MOVING A PLAYER ON THE GROUND

A player is knocked out cold. Do we move them or not?
The first thing to think of is your first aid skills. ABCs - meaning Airway, breathing and circulation. If all these are fine, then have someone hold the player's head in a neutral position until he or she becomes conscious, and someone qualified comes to their aid.

If the player is breathing, but still unconscious, the best thing to do is to leave them until this qualified person arrives. Tell your players this because it could be disastrous if they just ‘roll them over!’

All coaches have a responsibility to know how to identify the signs and symptoms of concussion and what to do.

That's where the four 'R's' come into play. They stand for:
Recognise - the signs and symptoms of a concussion
Remove - get the player out of the game or training
Recover - seek medical attention and follow the graduated return to play guidelines
Return - get back to full participation

But coaches also have a responsibility to prevent concussions by coaching their players about keeping their heads safe in the tackle. New Zealand Rugby has set up a programme that concentrates on this aspect of the tackle and it’s called the ‘Tackle Clinic’. It’s a series of activities designed to get the head in a safe position by using active feet, and placing the head to the side or behind the ball-carrier.
All other elements like leg power, driving, landing on top and getting up quickly will still be part of a coach’s normal tackle session, but it’s not part of the Tackle Clinic.

•    If the player has a SUSPECTED CONCUSSION, they have to follow the GRTP.
•    70% of teenage players don’t even report a concussion.
•    Only a referee can award a BLUE CARD.
•    Only a doctor can give medical clearance, and only then is contact training allowed to resume. They cannot give you clearance to play earlier.
•    We need players to look out for each during the game, and if they show any symptoms of a head knock, they need to look after their mate and get them removed from play.
•    Moving through the GRTP is all about having zero symptoms at each stage before moving to the next level – it’s not about just meeting time frames.