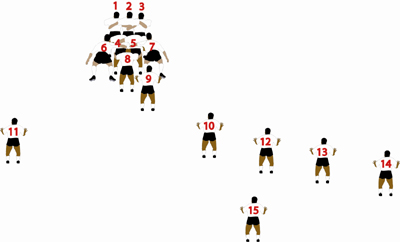 The loosehead prop packs down in the scrum on the left-hand side and together with the tighthead prop provides support for the hooker. They also support the jumpers in the lineout.

The hooker packs down in the middle of the scrum, uses their feet to ‘hook' the ball and normally throw in the ball at lineouts.

The tighthead prop packs down in the scrum on the right-hand side and together with the loosehead prop provides support for the hooker. They also support the jumpers in the lineout.

There are two locks in a rugby team. The locks are usually the tallest players and are required to jump in lineouts to catch the ball or get the ball down on their team's own side. In the scrum, locks pack down in the second row and bind on to each other and the prop in front of them. They add a lot of power to the scrum.

The blindside flanker binds onto the side of the scrum closest to the sideline. Their first priority is to be part of the loose forwards strong defensive screen and be part of the lifting unit or a jumper in lineouts

The openside flanker binds onto the side of the scrum furthest from the sideline. Their first priority is to be first to the ball when a breakdown occurs and provide a strong defensive screen.

The number 8 packs down at the back of the scrum usually binding onto the two locks and controls the movements and feeding of the ball to the halfback. The number 8 is in the position where the ball enters the backline from the scrum and can elect to pick and run with the ball.

The halfback is the important link between the forwards and the backs and is behind the scrum to get the ball out and maintain movement. They are also able to stand close to the lineout to catch any knock-downs from the jumpers.

The 1st 5/8 makes tactical decisions during the game, on whether to kick the ball to gain space or tactical advantage or move the ball to their outside backs, or to run with the ball themselves. The 1st 5/8 is, in most cases, also the goal-kicker.

The 2nd 5/8 is positioned outside the 1st 5/8 and inside the centre in a standard backline formation. They are often used to carry the ball up to either straighten the attack or set a platform from which to launch another attacking phase. Has to be a good tackler as opposition attack will often come their way.

The centre is positioned outside the 2nd 5/8 and inside the wing in a standard backline formation. Their role is to provide time and space for the winger outside them.

The wings are usually the fastest players, finishers of play and often score the tries.The principle is that the forwards and backs create space so that once the wings receive the ball they can have a clear run for the try-line. The wings must also be good tacklers when defending.

The fullback is often referred to as the "last line of defence" and is positioned behind all their teammates. They often catch high balls, return kicks from the opposition and act as an extra player on attack.