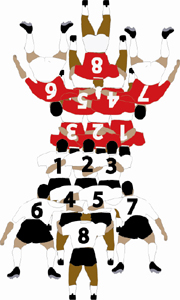 A formation used to restart play after a knock-on or forward pass, or at any time when ordered by the referee.

Forwards on each side bind and the two groups come together, with the front rows interlocking to leave a tunnel between them. The halfback of the non-offending team feeds the ball into the tunnel midway between the front rows. The hookers attempt to get the ball back. The scrum ends when the ball is out of the tunnel and in possession of a player on either team.

The method of putting the ball back into play after it has gone out of bounds. The two sets of forwards line up opposite each other; a player from one side then calls a play and throws the ball between the two lines. 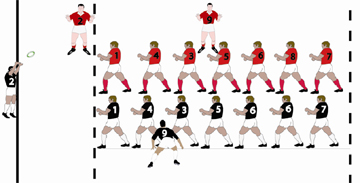