You are not the Coach

Don’t stress out, believe it or not you are not coaching the All Blacks

Yes, only Steve Hansen gets to walk around claiming the above, and that simple point alone is good enough to put the necessary perspective into place as you expect your team, young or old, to run around playing exactly like the All Blacks, with the same power, passion and intensity in their local  yellow and purple hooped socks.

Protests to get your team’s uniform changed to complete black were refused, but still you believe that the club final is, in fact, a reincarnation of the 2011 Rugby World Cup, as you look to secure your knighthood and your pick of any school coach’s role in the local area.

This mantra means straight up that it is highly unlikely your team has the same innate skillset, training and so forth that New Zealand’s elite professional players have, so don’t for a second think imitation is the sincerest form of flattery with a natural and significant division of class between the Tier-One Test nations and the local club outfit. 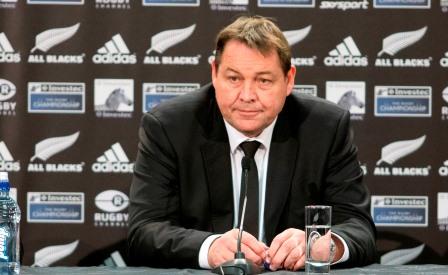 For remember, if you are coaching an All Blacks set play, you are going to have to teach all the same previous phases (winning the ball, building pressure through possession), and once you overcomplicate it, while comparing kids with the best in the business, things will eventually get a bit too confusing.

However don’t for a moment think the All Blacks, Black Ferns, All Blacks Sevens and Maori All Blacks cannot inspire:

-    Kids love to emulate a single player, this is great and something to nourish, but they will still have to learn rugby, just like their idols did for years before becoming well known.
-    Pre match rituals like the haka have been used?  You can’t coach the passion such events inspire into the playing core.
-    Take one element and teach it for sure!  If you have a massive winger who wants to be like Lomu, there is no harm in teaching him how to make a bulldozing run, but don’t forget the other finishing touches, especially in the modern game at any level which has seen the 11 and 14 evolve significantly in recent years.
-    Base an overall style around your team – such as the All Blacks enthusiasm to attack – but then coach them this based on attacking principles that will work best WITH YOUR players.

The more prudent question is what about you, the coach?

Aren’t you allowed to have backyard fantasies that you are in fact coach of the All Blacks?

Well yes, but make sure you keep it to the backyard and don’t forcibly bring it into reality that will only seek to alienate you from your players as it will be unlikely they will ever meet your expectations.

However keeping this fact in the back of your mind isn’t a sin, for ultimately the likes of Hansen was once a grassroots coach with the same aspirations.  There is nothing wrong with this aggressive target, but like the journey up a corporate ladder, don’t jump rungs without first seeing where you need to climb.

So if you are the next All Blacks coach, what you can do with your playing roster is:

-    Set goals, but keep them achievable
-    If you want to be the best, remember it isn’t just about imitating the All Blacks, but using other principles the world champions use – namely study the opposition, introduce new tactics to keep ahead of the curve, strive to have your players fitter than the others, and develop an innate feel of rugby that New Zealanders have in their DNA.
-    Give them individual targets in terms of their own performance.  Nothing beats one-on-one mentoring.

However, ultimately, the goal if you wish to persist turning your team into an All Blacks is to ensure that it isn’t just a one-person dream.

Share your vision with the team and see if you can get them to accept the idea that they can be the best in the world (or the neighbourhood).  Setting a goal is powerful, but striving to reach that as a united group is almost unconquerable.