Why You Must be a Good Rugby Supporter

Why you must be a good rugby supporter

Supporting your team goes far beyond merely cheering from the sidelines, for the unique commitment that we give to our sporting sides comes with a range of emotions that can be quite confronting.

These emotions may seem like harmless thoughts, but response to the game is something that can have serious and long lasting effects to players and others.

Perhaps the best way of summing up the most ideal support is to stand by your team “through thick and thin”, for that unwavering dedication to your team will often be a significant contributor to their success.

Support at the highest levels has significant benefits to a team – in dramatic evidence during the 2011 Rugby World Cup, when the much feted Stadium of Four Million got behind the All Blacks – and all players to a man remarked that the support was overwhelming.

Some would even go as far to say that as rugby supporters New Zealanders have collectively grown up, again in evidence at a Rugby World Cup, this time in 2007 when the All Blacks crashed out to France in the quarter-finals. 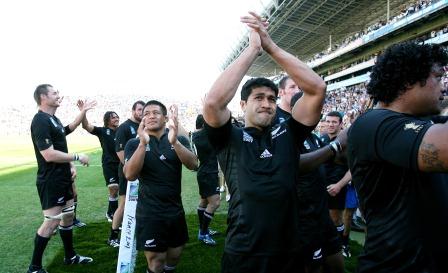 The team was not vilified when they returned home, with the supporters recognising the feats of a side that had conquered all comers before that fateful day in Cardiff, showing balance when weighing up how to react to the heartbreak that has been heralded to send a nation into mourning.

However the All Blacks, like every rugby team, has experienced the negative fallout of supporters wanting to vent their rage.

While one might struggle to recall Kiwis booing their beloved team, few other nations have been immune to this, with recently the Wallabies, Springboks and French jeered off their own fields.

The unfortunately reality is that this has little benefit to the sporting team.

However rugby’s elite does have an advantage – they can turn off the TV, put down the newspaper, and use mental conditioning to shut out the negativity (although this is easier said than done).

It is however at the lowest levels where rugby support can have long lasting effects.

The young child coached by the overzealous Father could, if he does not meet his parent’s standards, then potentially that negative support could spill over into the household and have serious consequences on other aspects of the children’s life.

Support should never give way to criticism, unless it is done in a constructive manner via coaching principles.

Support, in its ultimate form, is positive encouragement and reinforcement.

This support and encouragement can then give way to belief, and if that aspect is passed onto your rugby charges, there will be no limit to their achievements.

Encouragement (otherwise there is risk of quitting)
Reinforce (there is always a positive)
Belief (we can achieve anything!)

AGGRESSIVE RESPONSE (people won’t listen to you)
CRITICISM (what incentive are you giving your troops to continue)
ISOLATE (support is across the board, not individual)