Who is Benefiting and Who Isn't?

The new scrum engagements, who is benefiting and who isn't

Until the recent change in the scrum engagements, a huge focus for a scrum was to dominate the hit and ensure enough momentum was generated by collision, one of the specific reasons why the new call was introduced, due to the force and subsequent risk to a player’s safety.

Some thought this new law would depower one of the more primeval elements of the forward battle, but now the requirement for a front row and pack is to ensure that the motion is now generated via a standing start, something that requires more technique than the muscle needed to rule the hit.

All Blacks scrum guru Mike Cron had considerable input in the scrum steering committee which advised the International Rugby Board on the rule changes; in theory meaning that the World Champions would have an edge here.

However a powerful Argentine scrum, using a combination of their bajada technique (where all the force is generated towards the hooker) and some subtle shifts in the positioning of the front row (which we will cover later), were able to cause some problems for an All Blacks scrum that prides itself on being amongst the best in the world.

Further it was noticeable how less experienced players, with Andrew Hore and Tony Woodcock’s 180 Tests eventually being substituted, were not able to cope with the Pumas pack during the latter stages of the Test.

In the tough realm of the front row club, age and experience cannot be taken for granted.

Of course, excuses could be made.

Owen Franks, the All Blacks premier tighthead, wasn’t on field and it is the number three’s responsibility to be the immovable rock that anchors the scrum.

Dane Coles, despite being the future, is still an infant when it comes to the dark arts of the scrum. 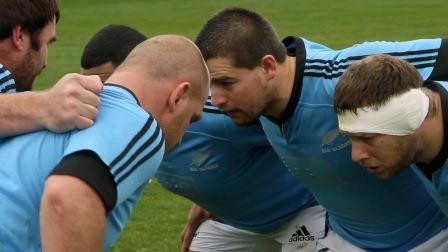 While Argentina is a country that is built on scrummaging, one wouldn’t be surprised if the whole time their hookers were actually trained to rake the ball, for it is obvious around the world that many number twos have to learn a skill that in the old days was perhaps their most important job.

So let us go through other changes to the scrum, before looking at techniques to ensure that the new cadence doesn’t catch your team off guard.

Hookers must hook, but opposites are not

A big part of the original scrum engagement was that it wasn’t just the team with the feed that hooked the ball, but many rival hookers felt that the ultimate test was to steal the ball as it was fed into the tunnel, a test of strength and balance.

So far, clearly due to the adjustment front rows have to make, the sight of a hooker in a scrum without the feed raking the ball has been non-existent.  Eventually the balance may tip towards this style of contest, for teams at the moment believe their advantage comes from being able to have eight men to push.

However rugby’s core charter is that it must be a contest.  Expect fast developing set pieces to use their hooker to rake, with or without the feed.

Is it better to not have the feed?

One of the consistent sights has been the scrum with the feed buckling as one leg is removed (as the hooker rakes the ball), allowing for a concerted eight man push which has reaped rewards for the defending team more than once.

It is far from impossible, as teams are still able to hook the ball and gain possession on their own feed, but here technique, not power, rules.  Often tiny alterations in the way a player bores in, shifts their shoulder, or turns inward or outward in the scrum, are allowing attacking teams to compensate for that moment where the hooker is using one leg to rake.

In the same way that hookers aren’t currently competing without the ball, expect teams with the feed to benefit more and more as the scrums continue to develop, as no doubt changes to the way the eight players scrummage as a unit will eventually evolve.

The sight of any flanker worth their salt, especially a hungry openside, hanging off the scrum like a piece of loose skin was common before these changes, but now the back row is required to play their part in the push as much as anyone in the tight five.
This in turn has allowed for attacking play if anything to become more fluent off a successful scrum.  The feeding teams halfback and number eight, and eventually the first receiver, don’t have jackals hounding them with almost illegal speed once the scrum has completed.  Some suggested that a good set piece only needed five players up front, but again the scrum is now about the power of eight.

Remember the hooking of the ball and the straight feed by the halfback isn’t so much a major change as much as the fact that the laws of the scrum are now being rigorously applied.

So now let us look at methods to scrum more effectively…

Be wary of the fourth call

Yes, there is still a fourth call, not that many of us would know it.  The final ‘engage’ call of the old process not merely indicated the commencement of the hit, but the power and ferocity that then ensued meant that the halfback would normally feed the ball via a signal from the pack, or alternatively the nine would tap the head of one of his props to let them know the ball was about to enter.

This is no more, with many referees now calling ‘Yes 9’, meaning that there is no element of surprise for a team with possession when feeding the scrum.

If anything, the side without the ball now is given amble time to prepare, and the set call isn’t so much the final part of the engagement process as much as a holding pattern until the halfback puts the ball into the scrum.

Power isn’t generated off the hit anymore; it is built from the strength of the standing start.  But with the halfback waiting for the shifting scrum to steady, the referee has been indicating more often than not when the ball can be fed.

The new rule is designed for safety and is forcing players who scrum to go back to the good old days and refine their technique, but the synergy between the nine and his eight players up front will eventually be the making or breaking of teams under these new laws.

Be front and square to your peril

One of the most pure rules of scrum engagement has been hitting straight and square, with eight players ideally forming into a perfect platform with the right spine position to put together what can be over one ton of force into the initial hit.

While ‘front and square’ will still be terms used by any scrum coach worth their salt, the importance of angles has become more apparent than ever before.

Remember the Argentina bajada?  That comes from all eight players shifting position slightly as if they were pointing towards the hooker, the arrowhead of one of the Pumas traditional attacking scrum plays.

A hooker might found now that their shoulders might be placed around the upper region of the opposition, preventing a pack without the ball from driving straight.

Equally if the front row can push their right shoulders down almost as one, the almost unnoticeable tilt of the scrum will allow the halfback to have a more obvious target.  To make this technique even more advanced, a hooker can work to rake the ball, but then shift forward to ensure that once the pill is moving towards the back of the scrum, they can then ‘step forward’, meaning that a scrum with possession can effectively push.

One golden rule here, if you change angle, either by coaches request or personal design, ensure that you lead with a shoulder or shift from your hips.  Never lead with your head or use your neck to determine which angle you burrow in with.