While there has been heavy focus on neck injuries in recent years, leading to changes in scrum engagements, there is also been a deliberate emphasis on player safety in contact situations that can lead to damaging the spine.

Unlike ‘standard’ injuries to the legs or arms, a spinal injury can effectively end a player’s career instantly, and in worse cases can led to permanent disability or death.

The scrum is highlighted as a danger area, but other physical contact phases including tackling and taking the ball into contact, combine with other set piece areas such as the lineout as risk areas for players.

The above mentioned scrum changes will evolve once again next season, with the steps of engagement losing ‘pause’ from its utterance.

The tackle area has become heavily scrutinised, with this season a zero-tolerance policy given to high or spear tackles, with cervical injuries a high risk when a player is tipped beyond the horizontal and put on the ground recklessly.

In New Zealand, national injury prevention guidelines under the ‘Rugby Smart’ program have led to a significant decrease in major injuries since 2001. 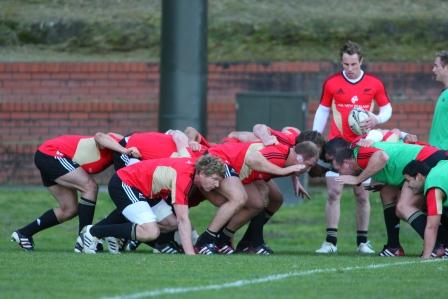 So let us take a further look in practices to further prevent spinal damage.

Studies have proven that front on tackling or poor technique remain the worst culprits for injury in this area, and at junior levels rates are often highest as the tacklers go into the dynamic situation unprepared.

Emphasis must be placed on the neck and head region when going into contact, and one must be wary of the positioning of the head depending on the ‘tackle entry’.

Keeping the head up in a tackle maintains that natural curve (lordosis) of the spine, meaning that the complex set of vertebrae will actually act as shock absorbers via the paravertebral muscles and the intervertebral discs – although it is important to note that while this might apply to a front on collision, side or cover tackles are better applied if the head is down towards the buttock region of the ball carrier.

Further to this is the fact that a poor tackle (injury wise and coaching wise!) is often a half-hearted one, and studies proves that committed tacklers often follow better technique.

Remember the tackler ideally wants to keep their shoulders above their hips, maintaining a straight line with their moving body position, which will not only make for a more effective tackle, but ensure that there is minimal risk to the participants.

It has also been proven that the most medically effective area to target for a tackle is between the upper thigh and sternum, for both tacklers and tackled players.

Also remember that fatigue plays a part in poor technique, so good player conditioning is key!

If a tackling player needs to pull out, remember the rule, head up and back straight.

Many of the same rules that apply to tackling apply here, but it is important to note that often the most successful way of avoiding injury to players in possession comes from teaching players to avoid frontal collisions.

Lineouts are actually one of the areas where injury isn’t as prevalent, but the risk of spinal injury can be at its greatest here due to the prime culprit for most of these situations – poor technique.

Make sure that players are well versed in the basics of lineouts, with the initial position requiring lifters and jumpers to be close together, giving a more stable platform of support once lifted.

Lifting a lineout jumper should be a controlled fluid motion, and there should be a focus not to ‘hold’ a player up in the air, as this compromises the jumper’s body position as well as the grip of the lifters.

A jumper should have a straight back at all times, and should communicate efficiently with the players around them, ensuring that the call and the lift are executed correctly.

Cardinal rules when safeguarding your spine:

•    Learn the natural bridge of your spine, this will allow you to take it into contact without forcing an unnatural curve to your back which can cause injury
•    Warm up effectively, there are 33 bones in your vertebrae that need to be loosened up
•    Safe technique means safe rugby which means effective rugby
•    NEVER EVER CHARGE INTO CONTACT HEAD FIRST