Smaller Can Be Better Than Bigger

We have had an important question from our Rugby Coaching Toolbox community.

How can smaller kids compete against bigger kids?

Let us begin by saying that sheer size, despite the physical components of rugby, means little (no pun intended).

However one thing cannot be avoided, pure physics can be very tricky to overcome.

A 110kg ball carrier moving at speed will have a BASIC (note, basic) advantage over an 80kg tackler. 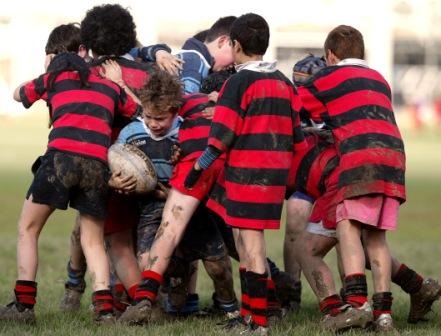 This is because they are bigger, for mass increases force.

From there though, the smaller individual has the edge.

Although not rugby related, a great story is of the big towering Great Dane who used to delight in teasing his little friend, the Chihuahua.

They were both one-year-olds.

“You are so tiny” the big dog laughed.

“Your bark is meek, I could swipe you across the yard like a feather. And that funny little face of yours, it could not scare a fly.”

The little dog smiled back at the giant, already huge despite his young age.

“Well, see how you are so big now, it means you age faster, and you know what that means!” and the Chihuahua could not stop laughing at the shock on the big dogs face.

Now walking up to the biggest player on the field and suggesting he won’t live as long as you is not what we are recommending.

But science and life expectancy have proven that the bigger you are, well, you get the point.

These little facts (there goes that pun again) can be pure gold for a smaller kid who thinks he isn’t as good as the bigger lad.

So now down to business.

The most important advantage that a smaller individual can develop is a higher power to weight ratio.

The biggest urban myth when it comes to weight training and muscle building is that the bigger you are naturally, the better you will be.

Smaller/thinner/lighter framed individuals, commonly referred to as ectomorph, have an instant advantage.

An ‘Ecto’ has longer limbs and typically has the ability to move faster than their bigger framed rivals, while the fact that they have to work longer and harder to build muscle can actually result in greater overall strength.

For the record, a Mesomorph (they gain muscle faster than anyone) and an Endomorph (best example? A front rower) are the other two of the three general ‘bodybuilding types’.

While some ‘Meso’ and ‘Endo’ types can run as fast as their smaller ecto rivals, one thing is for certain, smaller frames (which means critically less stress on the ankles and leg joints) mean greater agility and ability to shift angles or change direction more efficiently.

Another thing is the 80 minute factor.

A combative sport like rugby can be tricky for some younger players, they believe they all their training needs to be geared towards one moment – a giant tackle or a massive line break.

Here is another advantage, less bulk generally means more endurance, it is that simple, and because when you train you are moving that ‘less bulk’, it is easier to run.

And in the immortal words of All Blacks captain Richie McCaw, lifting weights might not make you a better rugby player, but going for a run and increasing your general fitness will.

This is where the bigger players make mistakes, they see the gains when they lift but really are not very keen to go for a run.

Make sure you don’t fall into this trap, for too many weights and not enough speed work is a recipe for disaster.

Yet while the smaller folk may be fitter and faster, our final point drifts back to strength and developing that power to weight ratio.

The smaller individual, giving away 30kg, can be as strong if not stronger than his bigger rival.

While physics can be uncompromising (that mass thing again), all the size in the world doesn’t mean anything if you go for a player’s ankles.

Some funny clichés can help as well.

Look up a picture of arguably the greatest endomorph bodybuilder of all-time, a gentlemen called Frank Zane.

While being (pound-for-pound) one of the smallest bodybuilders of his generation – incredibly Zane is 30-40kg lighter that the current Mr Olympias – yet he won three of the biggest titles available to a professional lifter (77, 78 and 79)

And he defeated Arnold Schwarzenegger, one of only two men in senior bodybuilding competition to defeat the Oak.

So aim big little person, you are much bigger than you think…

The closing point is this.

Many smaller folk fall into the trap of thinking they aren’t putting on any weight despite eating heaps.

Eating a huge feed of KFC might seem like you are trying to put on weight, but how many other meals did you have that day – likely less because you were bloating by so many pieces of original recipe.

Small folk don’t put on weight with a huge meal or two, it is constant and controlled eating.

But that is a topic for another day…