The Rippa Tackle – technique that applies to every level

Last week saw the completion of the successful Rippa Rugby ‘World Championships’, where children took part in an exciting tournament where tackling is affected by ripping tags of the ball carriers waist.

It is a safe and effective way of tackling, giving youngsters an opportunity to learn the skills of rugby.

To prevent a try being scored the defenders must rip the flag from the belt of the ball carrier. This forces the ball carrier to pass the ball. Six rips against the attacking team in one set of possession results in the ball being turned over to the defending team. 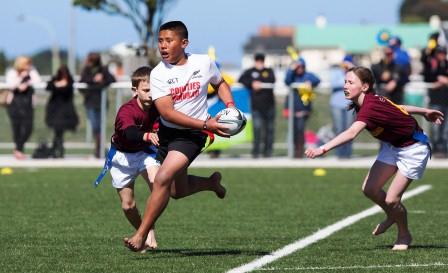 For an attacking player, it teaches them the art of attacking without physicality, while for the tackler it does the same, with a defender unable to use power or intimidation to tackle, instead relying on good body alignment, technique and timing.

Other aspects such as defensive positioning come into play, and for a coach, it gives the opportunity to go through other aspects that lead to a successful tackle.

•    Overall fitness.  Tackling, even grapping for flag, requires solid conditioning, so make sure that players are taught that their fitness will determine their defence.  Don’t forget that even Rippa tackles can make a defender go to ground – so remember All Blacks captain Richie McCaw’s defensive mantra that your screen is only as good as players are quickly getting off the deck to tackle again.
•    A team’s defence is only as good as its weakest link.  Ensure that it is quickly taught that defensive capabilities are about team-work.
•    Teach how to track a player.  Shifting sideways is one, but overall tracking is based on team communication.  Teach to watch the players eyes (signals intent), hands (shifting for the pass), and of course the ball.
•    One decision, one team.  If a player moves quickly in the defensive line, the entire team must do the same.  If a tackler makes the commitment to tackle, make sure if you are the closest player that you are tracking (as above) to make the tackle if your team-mate misses.

The actual Rippa tackle itself, if its mechanics were utilised in a full contract tackle, would be classed as close to a textbook move.

While you want to ensure that obviously at this stage the tackle remains as Rippa, there is no harm in ensuring the fundamentals that apply to a senior tackle are passed on to your charges.

Equally important is teaching other aspects of tackling they will eventually come across, namely tackling high or tackling low.

High or low will not rip the flags out of a ball carrier.

A high tackle in a senior context (but still below the neck and head region) can be the most physically dominant tackle that a player can make, but it runs the risk of illegality, significant injury to the ball carrier – but most importantly the higher the tackle the easier for the ball carrier to counter, with a fend or by earning his team a penalty.

A low tackle can be most effective, especially if a lurking flanker comes over the ball carrier, but is difficult to carry off correctly, as you are effectively going for the player’s legs only, and mistiming on such tackles can end poorly for the tackler.

Which brings us back to the Rippa tackle - or alternately, the textbook mid body tackle that can be applied to all levels!

•    Head up, eyes on the ball carrier
•    Close distance, but measure carefully, the more speed you gather coming into a tackle, the more likely a player can evade you.
•    Learn about angles.  Wide angles are good for long distance tackles.  Choosing the right angle can ensure that an opposition player can be harried into a corner.

GOING INTO THE TACKLE

•    Get your stance right.  Knees need to be bent going into contact, while hips down and hands back allow you to make the snatch (or hit eventually)
•    Head up, back straight.  It will be instinct for many players to drop their heads going into a tackle, make sure this dangerous aspect is covered.
•    Lead with your shoulder, not your head.
•    Keep your feet moving

Following these will allow your team to Rippa tackle effectively, but you have also now laid down the foundations for your players to eventually become master tacklers.