Retirement, evolution or stubbornness, the eternal question that is ‘shall I hang up my boots?’

All Blacks lock Ali Williams made headlines recently when he announced his international career was over, calling time on a decorated Test run and ensuring that the country’s most capped international second row forward leaves the grandest stage of all on his own terms.

It was an interesting call, for injuries and his immense leadership would have likely seen him called into the All Blacks squad, especially after showing his leadership credentials for the Blues this year.

But this was a man who had endured two tough years out of the game, injured at a time when he was unequalled as one of world rugby’s premier locks, and to the big man’s credit, he overcome a 25 month hiatus from the game with leg injuries to prove to the All Blacks and himself that he was still able to foot it at the highest level.

However the emergence of a new breed, headlined by Sam Whitelock, Luke Romano and now Dominic Bird and Jeremy Thrush, not only has the All Blacks lock stocks in good shape, but means that Williams, an invitee to the recently completed training camps, clearly saw the writing on the wall – especially considering the evolution of a second row forward to not only complete his core duties, but become a heavy body mover, a role that takes a significant toll on one’s body.

That is retirement, but other players have opted for evolution. 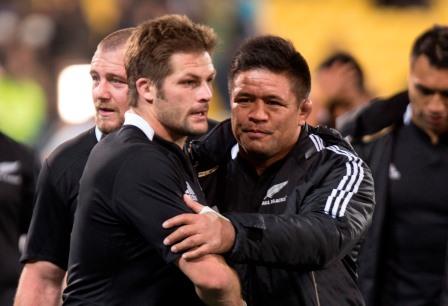 A certain All Blacks captain decided to develop his game, evolving to a point that allowed Richie McCaw to become the first New Zealand Test player to breach 100 Test matches, but that mark was never going to be reached if one of rugby’s premier scavengers took a step back from the chaos that is the ruck.

Now recognised as a fearsome ball carrier and crucial linkman, the lessons McCaw taught was not only is evolution necessary to prolong, but that adjusting one’s game is crucial to work with the cattle around you.  McCaw’s role is almost more of a pseudo blindside/eight man role, indicative of the fact that All Blacks teams now try to effectively have all 15 players acting as pilferers at the tackle contest.

Brad Thorn is another example, an ageless warrior who took steps away from the field, such as banning alcohol and practicing Yoga, to allow his frame to still inflict and absorb the punishment that come’s part and parcel of being one of the best tighthead locks to ever play the game.

Stubbornness, well, often that comes from a refusal to die.  Some player’s mental desire is able to challenge the flagging physical attributes meaning that they stay in the game longer than they should or could.

“I can still cut it” these players mutter to themselves even if they are consistently outplayed, but often it is the trappings of position that lead to many not wanting to pack it in, with financial reward and prestige something few wish to give away.

This in turn, often leads to the dreaded tap on the shoulder.

Ultimately, whatever happens, the overall needs of the team need to be balanced – and all feelings of mateship and loyalty be put aside.

As a coach, remember key lessons:

•    All sporting teams need a production line.  No player can play forever.
•    Selection, rotation, resting, give understudies a chance – make sure your selection principles are consistent and well managed.
•    Loyalty is important, but never at the risk of jeopardising the team.
•    Monitor players against each other, even at the risk of one player thinking they might be too old.  At the end of the day don’t wait until a match to see if a player cannot cut it anymore, this sort of vision should be seen on the training field first!

However as a coach this must be weighed up against experience.

You could have a player who might not have same prowess physically, but in some situations only a cool head created by years of battle will suffice.  These ‘cool heads’ might not have the body that they used too, but sometimes the top two inches is more important that the metres underneath.

As a player, ask yourself important questions:

•    Is it getting too hard, or more to the point, is your head telling you that with increased frequency?
•    Do you love what you do, or are you doing it because you have to?
•    How does the body feel?  As time allows you to hear what your body is saying more and more, you must listen!  The day little things start going wrong with your body – and ultimately your health – increasing stiffness, poor circulation, headaches or worse, then don’t ignore something that you might need to get some mileage out of in your later years…