Playing to Your Own Expectations

Playing to your own expectations, not that of others

Sometimes, especially at the higher levels, you will read or hear about how well your team and players are going to do, a classic example was in the first Test versus England, where local media did their upmost to remind us it was an understrength team that the All Blacks were going to face.

The All Blacks coaching team were having none of this, while curiously the English media were confident prior to the series, having seen on the fields of Britain the strength of their own team.

As hindsight so gloriously proved, England were a formidable challenge.

So here is our first point, everything towards preparing for your own match needs to be done quite selfishly, focusing on your own goals and playing to the standards that you set.

-    Have squad goals, and make sure they are being achieved.
-    Make sure individuals are setting targets match-to-match.
-    Look for strategic improvement, such as the implementation of new tactics.
-    Everyone, from the coach, to the captain to the squad, needs to have a clear vision about what they want to achieve on the field.

Ironically, as the All Blacks may have believed some sections of the media and ‘felt’ that they were going to play an understrength England, the World Champions strayed away from one of their usual tenets.

PLAN AND PREPARE FOR PERFECTION

In coaching, part of where one truly earns their keep is by putting together well worked strategies that will overcome any opposition.

At times, you will need to prepare specifics for what the enemy is going to throw at you, all great battle plans have key areas – looking to shut down an effective set piece, counter a wonderful attacking player, or nullify the opposition’s kicking game.

This is a core part of coaching.

But the other area is equally important, ensuring that your focus is internal to the point where a sizable amount of your tactical blueprint is about WHAT YOU WANT TO DO.

You might win on occasion by playing a strict shutdown game designed to close out all of the key areas of your rivals, but what happens if they change their plan during the match?

This is our second lesson.

Teams that are comfortable playing numerous styles and seem to be drilled to counter anything thrown at them are often those whose internal planning has been meticulous.

The most successful sides are those that impose their own style.

This is where you need to make sure you are meeting your expectations. 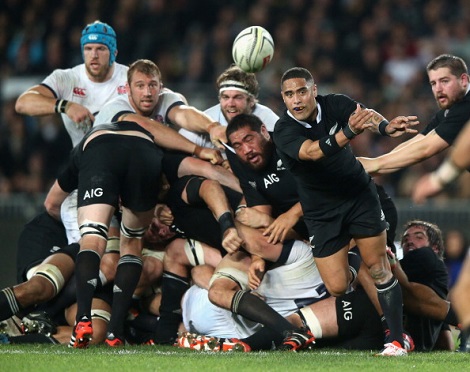 Shutting out the external distractions is paramount:

-    Don’t believe the hype, good or bad. If you think you are too good, you will be found out, but a bit of self-confidence and bravado is crucial for you need to rate your own abilities.
-    In a perfect world, don’t listen to what others are saying about your chances, they will create doubt and doubt is something that breaks down even the best game plan.
-    Like life, surround yourself with the sort of people that create mental stairwells, not slippery slopes, you want to believe you can climb those stairs and become a better player/team – naysayers never helped anyone achieve anything.
-    Be very wary of opposition propaganda. Some coaches and teams will do anything to break down a side. Do you really think Steve Hansen wants his All Blacks to think they are (as England pointed out) just human, or some special beings with a link to a proud history and heritage…

Some might assess that this is a large part of what makes the All Blacks so successful, with many quarters, including analysts from their own backyard, often ramping up the pressure on the team – to the point where sometimes even a victory is talked about as if it were a loss.

Again, this comes ultimately down to internal expectations.

The All Blacks have a rigid background of this, underpinned by over a century of remarkable results and a culture that players are the caretakers of the famous black shirt and are to leave their own special piece of history in the game.

If anything, there is a demand that players only improve on that legacy.

This is expectation at its finest.

If you as a player want to perform to your own expectations, don’t be afraid to dream big from the start.

That famous story of Richie McCaw as a young boy writing down that he wanted to be a ‘Great All Black’ was at the time stifled by fear of such belief (writing GAB, not the full words in question).

As it was, ultimately McCaw had enough confidence in himself that he has achieved as much as any player before him – some will successfully argue that eventually he will be recognised as the greatest ever New Zealand Test player.

But like the man who in older eyes holds that position – Sir Colin Meads – there would have been a strict expectation, which led to levels of performance that were not dictated by what others said or believed.

It was driven by the men themselves.

For years now McCaw, now the most capped All Black of all time, has had many comments aimed at his ‘aging body’ and ‘less willing legs’.

Even the finest can be plagued by doubt which can be created by the summaries of others.

The reality is, any young player performing as if they want to be an All Black or Black Fern will be better than a counterpart that believes deep down they don’t have what it takes.

Don’t be afraid to set your expectations high.

Remember, even the loftiest goals can have a series of small but manageable paths that will eventually help you reach the summit that you expect to reach.