OK, your prized child is only entering the age where they can play rugby, but why does a five, six, seven year old want to pick up a ball?

There are SO MANY THINGS TO DO!

What the heck is this rugby thing anyway?

I want to slay dragons, lead armies and fight battles in the jungle!

This is the time to get the teddy collection resorted, the dollhouse repainted, but most importantly, update the posters on my wall – those bands and movies are so yesterday.

Well, we want you to do all of that, and never stop.

That is until of course you grow beyond such things, but this is something that you won’t truly know till the time that each chapter of your life passes.

The favourite doll, the most readable comic, the best action figure of all time – they will need to be updated eventually.

But rugby is something that has more in common with your backyard fantasies, magical battles and the countless tea parties that you could ever imagine.

And we here, at Rugby Coaching Toolbox, are here to help.

For a moment, pretend you are a little lady. 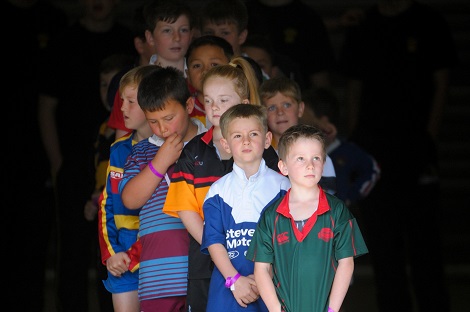 Mum does the best job on your pigtails, only Dad can push me in swings as high as that, my brothers are annoying, while sometimes the bigger girls try to be a bit intimidating.

Recently a small survey revealed among a group of eight to ten year old girls that the main reason that picked up the oval ball is that it made them feel “tougher and more confident”.

We don’t want to cause any misunderstanding, the best things in life as a little lady will remain aspects like your beloved pets, the big thing in your bedroom (think that amazing dollhouse or your rocking horse) and all other elements which only you know about.

But imagine, being able to reorganise your room faster than ever, because rugby has helped you become fitter.

Imagine leading your troops through the forests, and if a small little branch gets in the way, you will pull out the most powerful fend ever seen, leading your armies from the front.

Rugby has more in common with those little things, those important fairy-tales, which are part of your life.

Running through the gap?

Wow, the first time it glides through the posts will be among the most rewarding feelings you have ever felt (trust us!).

Such power, such force, can anyone possibly stop you!

When you are young, things can be so confusing, school is just a couple of years old, you are tiny compared to adults – while big time thoughts like jobs, marriage, houses and bills are a millennium away.

Rugby is a sport which demands clarity and fitness.

While it creates special new experiences yet gives you the ability to become confident enough to run at other kids while moments later another big child runs back at you.

This can be the start.

Suddenly those aliens, super-villains and mega dinosaurs aren’t so frightening.

That doll house is organised quicker than ever before, while you have never been able to lift your rocking horse above your head until now.

Life, young or old, can be a big challenge.

Rugby can make it a little bit easier.