Injuries in rugby are part and parcel of the game, but the spectre of player unavailability – or even worse last minute withdrawals – are indicative of the need to ensure that the team structure takes precedence over individual playing talents.

This is similar to a theme we have touched base on before, stressing the dangers of putting all of your eggs in one basket with a once-in-a-generation player.

Like a one-dimensional game plan (another recipe for disaster) heavy reliance on certain players, while potential folly, is only human – for such match breaking talents are compellingly attractive – so they must be managed effectively. 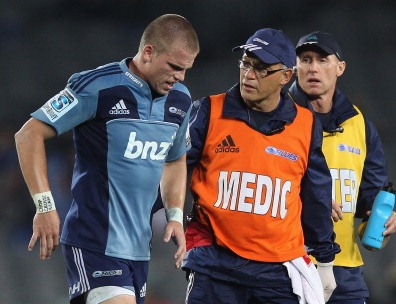 How could the All Blacks not re-write their entire match strategy during the 1995 Rugby World Cup, as they watched the colossus that was Jonah Lomu wreak havoc throughout the tournament?

But as the final proved, even arguably the most intimidating and unstoppable ball carrier in the game can be shut down.

And if it isn’t the specific reliance, it is losing key players to injury.

At the highest levels the All Blacks have of late been able to cover even their greatest players, namely at first five-eighth.

The Rugby World Cup story of Dan Carter, Colin Slade and Aaron Cruden going down injured, leading to a call up for Stephen Donald, is now urban legend – while in the last week we saw Carter’s Wellington injury curse strike, but again Cruden was able to step into the breach.

All examples prove the over-used cliché “There is no I in team”.

The reality is that without structure and overall team patterns, not only will individual talents not yield the desired results, but changes (which injury, form, retirements and so forth will dictate) will massively upset a side’s flow and rhythm.

We must look at both sides of the story from a coaching perspective, so let us first assume you will ignore the above and hedge all your bets on a star player or two.

•    Even the best players need something before receiving possession.  Lomu was better coming onto the ball with pace, Carter relishes taking the ball flat to the line, make sure your team understands how to best utilise their strongest weapons.
•    Mix it up.  The first test against the Wallabies Ma’a Nonu and Sonny Bill Williams crashed into the line, the second they were used as giant decoys.
•    Have a sub-plan based on opposition plans to counter your stars.  In the Rugby World Cup Final by the end of the match the Springboks entire defensive system seemed to permanently shift to the right (to counter Lomu).  A deft inside ball against the traffic off Lomu could have been interesting…

So with that out of the way, let us look at the guts of the idea that you need overall team structure.

This all starts off the field.

•    Treat all players equally.  No preferential treatment, again it might be human to favour your star player, but that star player could get cocky and not fulfil potential, while the players unconsciously ignored will never improve without attention.
•    It isn’t just about the run on team – it is about the squad.
•    Rotation shouldn’t be an ugly word, it allows resting of players, development of depth, gives opportunities, and builds competition within the team.  No player should ever own a jersey.
•    Be open and candid with your player meetings.  Don’t be afraid to tell players the hard news as to what they need to change to improve, but by the same token make sure that everyone has the opportunity to be the best they can be.

In training, build reliance on your fellow player and teamwork, rather than individual flair.

•    Get players to talk, talk, talk.  On the field 15 sets of eyes are better than one.
•    Preach the importance of setting up a play.  Don’t hospital pass to the biggest player on the field, putting people into gaps or setting up a lovely running angle comes from multiple players working together.
•    Teach that players need to be aware that even without the ball they are instrumental in attack – whether it be gaining possession in the ruck, acting as a decoy.
•    Most importantly – SUPPORT THE BALL CARRIER AT ALL TIMES.  Sonny Bill’s offloads wouldn’t have looked so flash if he didn’t have a player lurking off his shoulder at all times.

This then flows to your selection meeting.

•    No meeting should be “Get the ball to blah, and he’ll do the rest.”  Make sure that all members are involved.
•    Try to make yourself redundant and get the players to think for themselves.  This will not only lead to greatest tactical awareness and responsibility, but means that they will bind together as a co-operative unit to seek the answer.
•    After a team or squad is assembled, it is equally important to communicate with members outside the fringes – don’t name a starting side and ignore non-selected players.
On the field and during the game, look to set up these team measures.

•    Experience in and out.  If a younger or less experienced player comes into the team, make sure they have support.  Donald might have been the ‘fourth-ranked’ number ten in New Zealand, but he had the experience of Nonu and Piri Weepu around him.
•    Create mini-units within the team structure.  A great example of this is forward pods, where two or three pack members will charge up the tight as a combined force.  Often wings will switch flanks or fullbacks come into the line to support attacks.  This builds team-work and prevents individuality.

Most importantly, no single player in a rugby field can do a thing without the prior action of another player.

A lock needs the hooker to throw the ball, a halfback needs his forwards to secure possession at the ruck, the forwards need the tackler to be dominant to enable easier turnover ball…and so forth.

Remember the co-operative, not the individual, and the pleasing irony is that the individual talents of your players will only grow even more with the friendship and team-work of their friends and mentors (coaches!).