Play like the All Blacks and Chiefs, and ignore all statistics

The Chiefs won Super Rugby thanks to their ability to overcome game indicators that traditionalists would agree should lose a team a match, and the All Blacks looked to have developed this trait a few steps further, able to absorb punishment and come out second best in the statistics.

This in theory goes against the classic principles of sport.

Yet rugby is a vastly different beast to other codes, for the simple fact that arguably no other game in the world can be won despite having little influence in traditional game indicators.

The only constant seems to be territory.  This is something that hasn’t changed, despite more enthusiastic attacking teams willing to run the ball out from their own 22.

The other unbreakable number that will always give you victory is the one on the scoreboard, and this is closely related to the territorial game.  It is harder to score tries when you have to run 100 metres, and impossible to kick penalty goals if you are trapped in your own red zone.

But outside of these numbers, a team can win, irrespective of how one-sided the statistics may be. 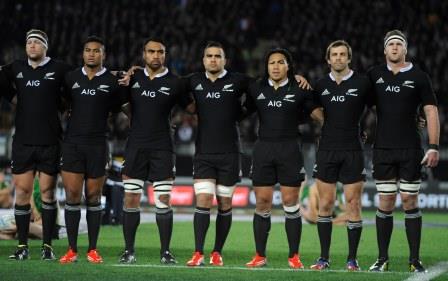 The most dramatic case of this is the 2007 Rugby World Cup quarter-final against France.  The All Blacks had 73 per cent territory, completed 166 rucks (to 42) and made just 73 tackles (compared with France’s 331, still to this day a Test record, if not a rugby one).

The French strategy that day was simple.  Tackle like maniacs and keep the discipline to military levels, and just two French penalties spoke of the organisation on defence that day.

Never has a truer example of ‘the best offence is a good defence’ been employed on a rugby field.

Many valuable lessons came out of that match for the All Blacks, and with that as our launch point, let us look at keys to winning without statistics.

However we must disclaim that traditionally at lower levels, dominating basic statistics is still an important platform to rule on the rugby field.  If two young teams take the field, the outfit that makes four times as many tackles will inevitably lose.

But as the intensity and level of competition increases, so will a need to be able to play to factors outside of the ruck or how many set pieces you win.

A player can make 20 tackles, but the one time a tackled player is driven back, turns over possession and leaves his team-mates backpedalling defensively, can be the moment that a contest in the balance will be decided.

So make sure that the quality of your team’s work is spot on.  You can have 99% possession, but if you can’t score with such a glut of ball, you might have some issues.  The team that backs themselves to score with just 1% possession, with the ability to mount quality and precise attack, will be more likely to triumph.

It is important that players never go through the motions here, piling blindly into a ruck or mechanically making tackle after tackle.

Watching the All Blacks go about their business is a good indicator.  They will very rarely pile into a breakdown, but when they choose their moments, they are often game changing ones.

Play the game to your pace

Statistics or no statistics, controlling how quickly (or slowly) a game progresses is a crucial part of winning rugby.  The Investec Rugby Championship gives us two great examples of this – with the All Blacks and Wallabies teams that like to play with speed, while the Springboks and Pumas are extremely happy to slow the contest down to a crawl.

Playing the game to your own speed allows you to dictate when to lift the quality of a moment (as above), but if you are having to adapt to the pace in which the opposition team plays, you run the risk of making the tackles and playing the breakdowns in a manner simply to keep up.

Some like to say this is the unspoken aspect of the ‘ebb and flow’ of the game, the rugby ‘yin and yang’.  However it is a direct part of your coaching philosophy, and if you want to play rugby at 100 miles an hour or move with the slow precision of a chess grandmaster – make sure you don’t let that pattern be interrupted.

If you are to come out of the wrong side of statistics, but win on the scoreboard, it will come from your ability to strike quickly.

Never mind a 20-phase build up between the forwards and back that ultimately might (note might) allow you to unpick a team’s defence; we’re talking about the deadly qualities that allow you to score in a moment.

The All Blacks, labelled as the masters of pouncing on opposition mistakes, follow this principle, while the Chiefs, using a similar defensive pattern to the World Champions, are another side that is willing to accumulate points via the less traditional facets.

•    Teams that rack up the statistics can get frustrated if they aren’t racking up points.  Frustration = mistake = penalty = potential points.
•    Counter attacking teams often have one player always ready to attack.  A common ploy is a wide stationed wing that isn’t needed on defence.  If turnover is won, a kicked ball and suddenly you have a playing chasing hard and efficiently against a team that is having to transition (as below).
•    Always look for that rare chance.  Blink and you will miss it.
•    Communicate – the one constant on coaching toolbox.  A counterattack will amount to nothing if you aren’t talking to the players you need to coordinate that ‘cobra strike’

Transitional play is perhaps the most advanced aspect of coaching and the best teams in the world are those that can effortlessly transition between attack and defence.

It is the ability to switch play, and is coached by ensuring that your players are switched on at all times – alert for the opportunity, hungry for that chance, eyes open for a counterattack.

However transitional play is a tricky aspect to coach, for equally you do not want your players to get ahead of themselves and stray from the key task at hand.

•    Try not to commit all the team to the task at hand.  A player or two ‘spare’ can make transitional play even more effective.
•    The decision makers here, usually a combination of the back row and halves, need to ensure they are alert and working together.  If a flanker turns over possession, it is then up to one of the playmakers to start the transition.
•    Use your fullback carefully.  They are the last defensive bastion, but they are also the insertion into attack that can often make transition successful.
•    Support.  Transition play will need support.  A turnover and a burst up the field means nothing if supporting players haven’t picked the transition.
•    Have a call.  A signal that a transition is about too, or is currently, taking place can be of great benefit.