Baby Black to All Black

Baby Black to All Black – managing the promotion of players

This season we have seen a dramatic strengthening of the pathway for the two senior national representative sides in New Zealand, with no less than six Under-20 World Championship winners from 2011 (or the Junior World Cup) selected in the recent All Blacks wider training squad. 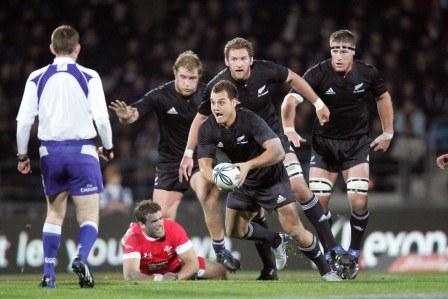 Never before has our elite team had so many fresh faces come in, mixing with nearly 20 World Cup winners, many of whom are considered the finest players in their position in the game.

This is quite dramatic as unofficially the level below All Blacks representation is Super Rugby, then the ITM Cup.  As important as the Under-20 program is, often players will need to cut their teeth with a province and gain a Super Rugby contract before being considered as a possibility to wear the famous Black jersey.

All Blacks coach Steve Hansen isn’t relying on his core of World Cup winners, but has introduced fresh blood for a myriad of reasons.

No doubt the wily mentor wants to ensure that his veterans don’t rest on their laurels, but more importantly is ensuring that contingency plans are immediately put into place, with Hansen admitting the core of the All Blacks was “an aging side”.

Part of the All Blacks legacy demands success test-to-test, but Hansen would have studied his history, and knows that many teams, New Zealand included, have been caught out without the steady introduction of young tyros to rejuvenate the side.

This occurred towards the tail end of Sir Graham Henry’s test reign, where the likes of Owen Franks, Sam Whitelock, Kieran Read, Israel Dagg and Aaron Cruden were introduced – and now are considered incumbent All Blacks.

The latter, now looking like he is entering the peak of his powers, won the International Rugby Board’s Junior Player of the Year in 2009, but despite making his All Blacks debut the following season, has only recently begun to look like a complete player.

Introduction of such players, even those as gifted as Cruden, takes time, as the intensity and physicality of test match rugby is many steps up from Under-20 level.

This season Beauden Barrett, Sam Cane, Luke Whitelock, Brad Shields and Julian Savea have made the grade, but the blockbusting winger is another cautionary tale of early introduction.

The winner of the IRB Junior Player award in 2010, Savea, by his own admission, struggled in 2011 to adjust to the pace of the game at Super Rugby level.

This season however he has been a revelation, and a well-deserved addition to the All Blacks squad, with injuries to Cory Jane and Richard Kahui potentially signalling a test debut for Savea against Ireland in June.

However while the All Blacks coaching team is focusing on contingencies and the next generation, they will not thrust the youngsters into the most elite rugby arena of all – with the goal at this stage to give them a taste of what is required in international rugby.

Cruden spoke to the IRB’s show Total Rugby and said that his time in the Under-20 environment was a crucial step to eventually becoming an All Black and World Cup winner.

“I think that was my first New Zealand jersey, that Under 20s jersey, and that tournament and title really means a lot to me,” he said.

“The JWC just gave me a real taste of it all, the whole international scene and sort of what it really takes to be able to back up week in, week out and game after game to make sure you are peaking every time you hit the field to give yourselves the best chance at winning."

Cruden is one of 49 players who featured at the 2011 Rugby World Cup after representing their country at Junior World Cup (Under-20) level.

“I think it proves that the pathway works,” Cruden said.

“There are a lot of great rugby players all around the world and I think that Under 20 tournament is a great pathway to be able to apply your trade and sort of show your wares on the international stage and then you never know what can happen.”

For fans of All Blacks history, if the unthinkable was to happen, and a host of these youngsters were to represent their country, the original Baby Blacks are an example of how the legacy and mana of the Black jersey can make test heroes out of young men.

In 1986 the All Blacks fielded a side with 13 test debutants against Five Nations champions France, after many of the regulars were under suspension for participating in the Cavaliers tour to South Africa.

In front of nearly 25,000 at the old Lancaster Park, the Baby Blacks pulled off a massive upset against a powerful French side.

Moving players up the ranks is a delicate act, but the thrill of fulfilling a childhood dream and putting on your country’s jersey can often make men…out of babies.