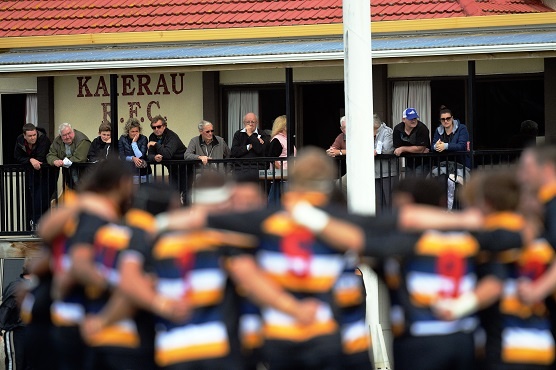 Numbers
1. How many players are each team allowed?
Answer: No more than 15 players in the playing area during play.

2. May a match organizer authorize matches to be played with fewer than 15 players?
Answer: Yes

3. May a team make an objection to the number of players in the opposition team?
Answer: Yes, and if there are too many players playing, the referee orders the captain of that team to reduce numbers appropriately – the score at the time remains the same.   [PK]

4. In international matches, how many replacements may be nominated?
Answer: 8

5. For other matches can the match organizer decide how many replacements may be nominated?
Answer: Yes, but only up to a maximum of 8.

6. When may replacements be made?
Answer: When the ball is dead and only with the permission of the referee.

7. What should the referee do if a player re-joins or a replacement player joins the match without the referee’s permission?
Answer: Award a PK to the opposition for misconduct.

9. If a match organizer has determined squad sizes of 23 may be used but a team has only 2 front row replacements, how many players may be nominated in the squad?
Answer: 22

10. Prior to a match, what must teams tell the match officials of regarding the front rows?
Answer: The positions the front row players can play in.

11. May a front row player start the match in a different position?
Answer: Yes.

12. Who’s responsibility is it to ensure all front row players are suitably trained?
Answer: The teams.

2. May a match organiser stipulate the conditions under which a game may start with uncontested Scrums?
Answer: Yes.

3. How many players must be in a scrum if they become uncontested due to sending off, temporary suspension, or injury?
Answer: 8

6. When may a non-front row player be allowed to play in the front row?
Answer: Only when no front row replacements are available.

7. What must happen when a front row player is temporarily suspended and the team cannot continue with contested scrums?
Answer: The team nominates another player to leave the field of play and another front row player comes on until the end of the suspension period.

8. What must happen when a front row player is sent off and the team cannot continue with contested scrums?
Answer: The team nominates another player to leave the field of play and another front row player comes on until the end of the suspension period.

Permanent Replacement
1. May an injured player be replaced?
Answer: Yes, but the replacement is permanent.

2. Who can decide of a player is injured?
Answer: A. at national representative level, a doctor; B. in other matches, a medically trained person; C. the referee.

3. May the referee order a player to leave the field to be medically examined?
Answer: Yes.

Permanent Replacement – Recognise and Remove
1. Must a player who has been concussed or is suspected of concussion be removed from the playing area?
Answer: Yes.

Temporary Replacement – Blood Injury
1. May a player with a blood injury be temporarily replaced?
Answer: Yes, for up to 15 minutes of actual time but that player must return as soon as the bleeding is controlled.

2. For international matched, who decides if an injury is a blood injury?
Answer: The match day doctor.

Temporary Replacements – All
1. Can a temporary replacement be replaced?
Answer: Yes.

2. If a temporary replacement is injured can that player be replaced?
Answer: Yes.

3. If a temporary replacement is sent off, can the originally replaced player return to the field of play?
Answer: No except to comply law 3.19 or 3.20.

5. If time allowed for a temporary replacement elapses during half time, what should happen?
Answer: The replacement becomes permanent unless the replaced player returns to the field of play immediately at the start of the second half.

Tactical Replacements Joining the Match
1.When may tactically replaced players return to play?
Answer: For A. injured front rowers, B. blood injury, C. HIA, D. injury due to foul play, E. law 3.19 and 3.20