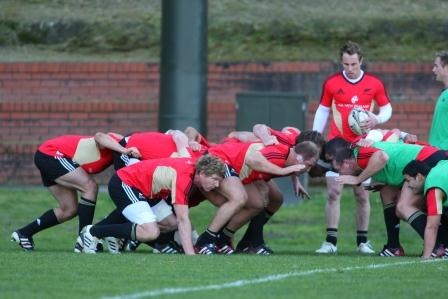 1. What is the purpose of a scrum?
Answer: To restart play with a contest after a minor infringement stoppage.

Forming A Scrum
1. Where is a scrum formed?
Answer: In the scrum zone at a mark indicated by the referee.

2. What does the referee make the mark for?
Answer: To create the middle line of the scrum.

3. How long have teams got to form a scrum after the mark has been made?
Answer: 30 seconds.

5. When a team is reduced to fewer than 15 players for any reason, can the number of players in each team in the scrum be similarly reduced?
Answer: Yes, however they are not obliged to.

7. How do players in the scrum bind?
Answer: A. prop’s bind to the hooker, B. the hooker binds with both arms either over or under the prop’s arms, C. the locks bind with the prop immediately in front and each other, D. back row players bind onto a lock.

8. How should each scrum pack face?
Answer: Each other either side of and parallel to the middle line.

9. How far apart should front rows be when forming a scrum?
Answer: Not more than an arm’s length apart with the hookers at the mark.

Engagement
1. When should the referee call “crouch” and how should the front rows crouch?
Answer: When both sides are square, stable and stationary and a. the front rows then adopt a crouched position with head and shoulders no lower than their hips, B. front rowers crouch ear against ear with their heads to the left of their immediate opponent so that no player’s forehead is up against an opponent’s forehead.

3. When should the referee call “set”?
Answer: When both sides are square, stable and stationary and A. only then may the teams engage, B. all players must be in a position to push forward, C. each front row player must have both feet on the ground with their weight firmly on at least one foot, D. each hooker’s feet must be in line or behind the foremost foot of that team’s props.

Throw
1. Can the scrum half choose which side to throw the ball in?
Answer: Yes.

2. How does the scrum half hold the ball before throwing it into the scrum?
Answer: By holding the ball with both hands so the ball is side onto the scrum.

3. How does the scrum half throw the ball into the scrum?
Answer: A. from the chosen side, B. from outside the tunnel, C. without delay, D. with a single forward movement, E. at quick speed, F. straight with the scrum half being able to stand a shoulder width closer to their side of the scrum, G. so the ball first touches the ground inside the tunnel.

During A Scrum
1. When does a scrum begin?
Answer: When the ball leaves the hands of the scrum half.

2. When may teams push?
Answer: Only when the scrum starts.

3. May possession be gained by pushing the opposing scrum off the ball?
Answer: Yes.

4. How may players push in the scrum?
Answer: By pushing straight and parallel to the ground.

5. When may front row players strike for the ball to gain possession?
Answer: Once the ball touches the ground in the tunnel.

6. May front row players strike for the ball with both feet?
Answer: No.

7. Must the hooker from the team that threw the ball in strike for the ball?
Answer: Yes.

8. Can a front row player intentionally kick the ball out of the tunnel?
Answer: No.

9. Can any player in the scrum play the ball?
Answer: Yes, but only with their feet or legs and they cannot lift the ball.

10. What must the referee do if the scrum collapses or a player is lifted up or out of the scrum?
Answer: Stop play immediately.

11. When the scrum is stationary and the ball is available at the back of the scrum for 3-5 seconds, what should the referee do?
Answer: Call “use it” and the team in possession must play the ball.

Offside at Scrum
1. Must players remain onside at a scrum?
Answer: Yes.

2. Where must the scrum half not throwing the ball in stand?
Answer: A. on that team’s side of the middle line next to the opposing scrum half, or B. at least 5m behind the hindmost foot of their team’s last player in the scrum and must remain there until the scrum is over.

3. Once the scrum begins, how must the scrum half of the team in possession stand?
Answer: With at least one foot level with or behind the ball.

5. Where must players not participating in a scrum stand?
Answer: At least 5m back from the hindmost foot of their team.

6. When is the goal-line the offside line for non-participants at a scrum?
Answer: When the hindmost foot of a team in in-in-goal or within 5m of the goal-line.

7. When do offside lines no longer apply at a scrum?
Answer: When the scrum ends.

Resetting A Scrum
1. When there is no infringement, when should a referee reset the scrum?
Answer: A. the ball comes out either end of the tunnel, B. the scrum collapses or breaks up, C. it wheel more than 90 degrees, D. neither side wins possession, E. the ball is accidentally kicked out of the tunnel – if it is intentional PK.

2. Who throws the ball into a reset scrum?
Answer: The team that previously threw it in.

Ending A Scrum
1. When does a scrum end?
Answer: A. when the ball comes out in any direction except the tunnel, B. when the ball is picked up by the hindmost player or that team’s scrum half, C. when the number eight picks up the ball from under the feet of a second rower, D. when the referee blows the whistle for an infringement, e. when the ball in a scrum is on or over the goal-line.

Dangerous Play and Restricted Practices in a Scrum
1. What does dangerous play in a scrum include?
Answer: A. front rows charging against each other, B. pulling an opponent, C. intentionally lifting an opponent off their feet or forcing them upwards out of the scrum, D. intentionally collapsing a scrum, E. intentionally falling or kneeling.

2. What are other restricted practices at a scrum?
Answer: A. falling on or over the ball after it has emerged from the scrum, B. the scrum half kicking the ball while it is in the scrum, C. a non-front row player holding or pushing an opponent,

D. bring the ball back into the scrum after it has left, E. non-front row players playing the ball while it is in the tunnel, F. a scrum half attempting to make an opponent believe the ball is out of the scrum.

Scrum Law Variations
1. May a union implement U19 scrum law variations at defined levels of the game within its jurisdiction?
Answer: Yes.