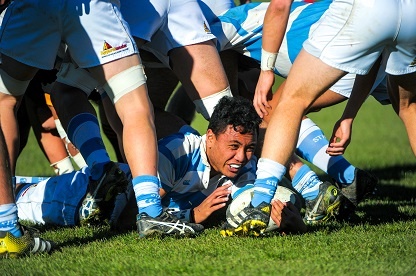 1. What is the purpose of the ruck?
Answer: To allow players to compete for the ball when it is on the ground.

Forming A Ruck
1. Where can a ruck take place?
Answer: Only in the field of play.

2. How is a ruck formed?
Answer: When at least one player from each team are in physical contact over the ball on the ground.

3. At all stages of the ruck how must players’ heads and shoulders be positioned?
Answer: No lower than their hips.

Joining A Ruck
1. How must a player join a ruck?
Answer: By being on their feet and from behind their offside line.

2. May a player join alongside the hindmost player?
Answer: Yes, but not in front of this player.

3. May an arriving player join onto a team-mate or an opponent?
Answer: Yes, but the player must bind at the same time they make contact with the player they are binding onto.

4. If players do not join the ruck where must they go?
Answer: They must retire behind their offside line.

5. What can players who have previously been part of ruck do?
Answer: Re-join the ruck provided they do so from an onside position.

During A Ruck
1. How can the ball be won at a ruck?
Answer: By rucking or pushing the opposition off the ball.

3. Must players remain on their feet at a ruck?
Answer: Yes.

4. May players be alongside a ruck?
Answer: No, they must be bound or caught up in it.

5. May players play the ball with their feet in a ruck?
Answer: Yes as long as it is done in a safe manner.

6. What must players on the ground at a ruck do?
Answer: Attempt to move away from the ball and not play the ball as it emerges.

F. return the ball to the ruck, g. take any action to make opponents believe that the ruck has ended when it has not.

Ending A Ruck
1. What must happen when the ball is clearly available at a ruck?
Answer: The referee calls “use it” and the team winning the ball has five seconds to play the ball away from the ruck.

2. When does a ruck end and when is play able to continue?
Answer: When the ball leaves the ruck or when the ball is on or over the goal-line.

3. When the ball becomes unplayable at a ruck, what happens?
Answer: The ruck ends and a scrum is awarded to the team moving forward at the start of the ruck; if no team was moving forward the attacking team throws the ball in.