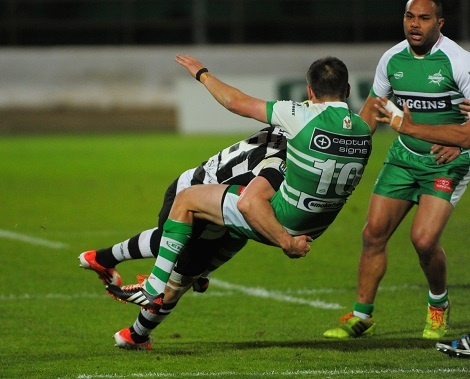 1. What is the principle of the tackle?
Answer: It can take place anywhere in the field of play and the actions of the players involved must ensure a fair contest and allow the ball to be available for play immediately.

Requirements For A Tackle
1. For a tackle to occur what must happen to the ball carrier?
Answer: The ball carrier must be held and brought to ground by one or more opponents.

2. What does being brought to ground in a tackle mean?
Answer: The ball carrier is lying, sitting or has at least one knee on the ground or on another player on the ground.

2. How may tacklers play the ball?
Answer: From the direction of their own goal line provided they have complied with their other responsibilities and a ruck has not formed.

5. Any player who gains possession of the ball at a tackle must to what?
Answer: A. play the ball immediately by moving away or by passing or kicking it, B. remain on their feet and not go to ground at or near the tackle unless tackled, C. may be tackled provided the tackler does so from the direction of their own goal-line.

7. When does a tackle end?
Answer: A. a ruck is formed, B. a player on their feet from either team gains possession of the ball and moves away or passes or kicks the ball, C. the ball leaves the tackle area, D. the ball is unplayable where by a scrum is formed with the team moving forward to throw the ball in and if no team was moving forward, the attacking team throws the ball in.